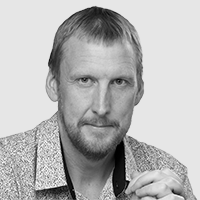 Ian Yates has spent his career working at the intersection between science and technology. Beginning his career in the lab, initially as a food microbiologist, he then moved into various drug discovery roles at GlaxoWellcome (UK) and AstraZeneca (Sweden). While working in pharma labs, Ian found his professional passion – applying technology and automation to accelerate scientific discovery. This passion led Ian to move to California and join a lab robotics company, Velocity11 (later acquired by Agilent Technologies), where he led a team that delivered automation solutions globally. Joining Thermo Fisher Scientific in 2017 as a Director for the Lab Automation business, Ian is currently the Director of Enterprise Science & Innovation Partnerships. His current role creates customer partnerships that will transform the labs of the future. Ian volunteers as a career coach and mentor and as an advocate for improving diversity and inclusion in STEM workplaces.